Practical A: Write up a short Storify article that incorporates week four’s tasks.

This week I was to convert the quotes from my short story in week four to tweets then write-up a short Storify article that incorporates those tweet/s based on the original interview.

I actually found Storify quite adaptable as you could edit a number of times as a draft before producing it.  There were different tools to use, the fact you can click and drag images around and use the different elements for effects.

Having to reshape the story and add more narrative was a little difficult at first as I had to have that clear direction for both my interviewees. 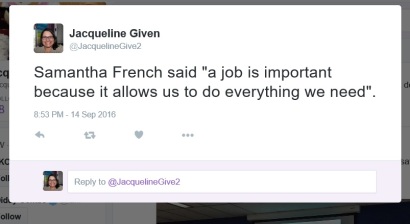 Practical B: One specific event chosen

I have chosen to do the NRL elimination semi final 1 sports event held in Townsville.  The teams playing are North Queensland Cowboys Vs Brisbane Broncos.

The audience is mainly the sports fans of both the teams and of the rugby league as well as community members and sponsors.  Also present are the media networks, journalists and sport photographers.  It will be a televised event so thousands or millions of viewers will be tuned in.

A number of things will be learnt about this event including: the rules and regulations of semi final time, how fans react and can change the game, behaviours of the spectators/fans and players, how the community rallies around its home town team, how you live every moment of the game with the crowd and players and most importantly who wins the game.

To give this story more interest or impact I believe a good/great human interest story would be beneficial such as fans that have travelled far to get to the game or a family’s love and support of their favourite rugby league team or even a community group that supports all the home games of the team.

The story structure will be very simple and straight to the point with photographs and video footage from the event to include the atmosphere, main events, interesting quotes and stories from those attending the event and of course the final outcome, who will be the winning team and progress into the next finals.

This weeks quiz asked ten questions and to read Chapter five of Hicks, English for Journalists in preparation for the quiz.

My first attempt was quite good and I was happy with myself achieving 8/10.  Spelling is always controversial to me and I confess I spell average but could do better, well we all can I guess.  Again a learning curve we all have to partake in to better ourselves especially if journalism is going to be our career, however it is still needed as a graphic designer which I am studying for.  Heaven forbid if I get the client’s business name spelt incorrectly during the printing stage.